VCP is a privately owned stevedoring and warehousing company, operating within the jurisdiction of the Ventspils Free Port, providing transshipment services between East and West for all dry cargos. Founded in 1994 upon the rich tradition of the Ventspils' port as a major transport gateway between the East and the West dating back to the early 1900's, it has developed into a modern, dynamic company, operating to Western standards, serving the world's leading trading companies.

Operating on its up to 34 acre facility on the Western coast of Latvia, in the ice free port of Ventspils, it serves as a major transition station for raw materials from the CIS countries to Europe and beyond, as well as, in the opposite direction. Since deepening of the port entry canal to 17.5 meters, vessels of up to 82,000 tonns carrying capacity can be accomodated.

The modern port infrastructure with extensive warehousing facilities, coupled with top international management and experienced labor force, make it an excellent choice for inward and outward movement of cargos.

In the Permit of the category “B” No. Nr.2700-08-10, valid from 28.08.2008 till 27.08.2013, conditions of the industrial operations are specified according to the requirements stipulated in the laws of the Republic of Latvia concerning the environment protection.   The Permit contains volumes and nomenclature of cargoes, which handling is permitted at our company.

VCP is a member of the Baltic Association for Transport & Logistics (BATL) and is ISO 9001:2008 certified. 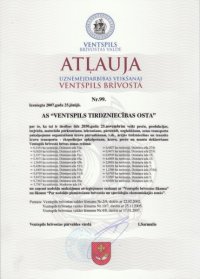